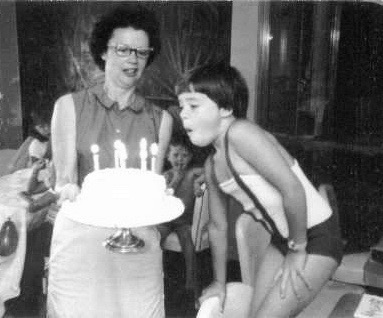 In 1965 our family went to Brazil for missions. We took a slow boat to South America. I turned seven on that big boat. It was an unforgettable experience! The chef baked me a huge birthday cake, and all the children on board were, suddenly, my friends at my special birthday party. I didn’t know at the time, but I later understood we were to be gone for 5 years, before coming back home. I feel sure if a child my age could really comprehend such a truth, that child would not willingly go. I was oblivious to all adult truths surrounding the reason we found ourselves on this boat.

The only two things that mattered to me, in that moment, were: First, there was a swimming pool on the boat and, second, there were hundreds of Hershey candy bars packed carefully on one side of my Mom’s large suitcase! The suitcase was perfectly slid under her bed in our cabin on the ship. She did her best to hide this truth from my brother and me … but you can’t hide chocolate from two young children.   That’s just impossible! We sniffed it out and, sure enough, when we searched beneath a few well-placed articles of clothing, we hit the mother load! Every child’s dream … enough chocolate to swim in!

We had consumed about a year’s worth by the time we were caught chocolate-handed. We both were up to our elbows in chocolate and beautiful Hershey brown and silver wrappers. As I wiped my mouth on my arm, I looked up, first at my dad, and then my mom. My brother, Mark and I looked wide-eyed at each other, trying to imagine how much trouble eating such forbidden, hidden chocolate would incur. As they walked in the room to further witness the crime scene in all its glory, we both waited. I wouldn’t swear by it, but I thought I saw a well-subdued smile on my father’s face. I felt hopeful. My Mom, on the other hand, didn’t find it amusing, but upsetting. I saw tears well up in her eyes, and I felt remorse for almost every single candy bar I had consumed.

The longer I sat there, the worse I felt. I wish I could say it was remorse but the truth was I felt sick over it … actually, quite ill. She brushed away her tears and took me by the chocolate hand, lifting me up out of the mounds of Hershey wrappers, rushing me to the bathroom just in time.   I was amazed at how little trouble we got into over the incident. As an adult reflecting, I’m sure their leniency was due to the bit of guilt they might have felt as they had suddenly removed us from our family, friends and homeland. If a stomach full of chocolate helped us, I believe they counted it just. I feel sure our parents carefully explained the call of God to go on mission for Christ; I just can’t recall that part. What I do recall was my brother being promised a monkey if he went quietly! I don’t remember what I was promised, but when I found that suitcase I realized that could very well have been my reward … five years worth of chocolate. Jackpot! 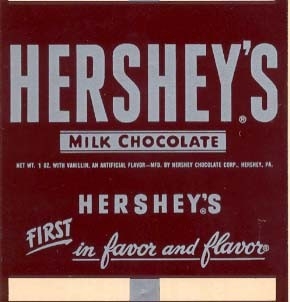 From that moment on, the chocolate suitcase was under lock and key and well guarded round-the-clock. So, what do two little kids do when the jig is up? Plan two … cause grief to anyone close enough to catch it. Our cabin adjoined a family who had a young boy named Giovanni. We could hear his parents call his name through the door. That was the only word we understood — Giovanni. We had managed to salvage a few of the Hershey wrappers before Mom destroyed the evidence. One day we decided to put back some candy bars into their wrappers (minus the chocolate, of course). That proved quite fun for about 30 minutes. Then, we heard the familiar voice ringing from the adjoining room of “Giovanni.” We slowly looked at each other, smiling. It was as if we were of one mind and knew exactly what to do. Our plan was set into motion.

We quickly began working. Mark and I gathered the best Hershey wrappers. Mark fashioned them together in a moment of artistic brilliance. We looked at our work and then at the adjoining door.  We got our Hershey bar ready and we both in unison called enticingly, “Giovanni,” in a sing-song tone no kid could resist. We heard movement from the next room.   We decided to share the glory and the responsibility, so, we each put one hand on the end of the intact Hershey wrapper and we slowly pushed it under the door. Like a cat, he immediately snatched it. We looked at each other with laughter. He had taken the bait.  Giovanni’s first sound was gleeful but quickly followed by despair. We only understood three words in the sentence that followed from that mysterious room, “Oh no, Marcos!!!” He was not happy, and the volume got louder and louder, “Marcos, Marcos!” I was terrified, what had we done? He wouldn’t stop, “Marcos, Marcos, Marcos!” This terror was followed by the slightest hint of relief, in that, it became obvious he didn’t know my name! He didn’t know my name!! Once again, my big brother willingly took the heat for me. My mom burst through the door, accessed the situation, never spoke one word, got down on her knees, took out the golden hidden key, opened up that big suitcase and pulled one Hershey bar from the remaining four-year stash. She handed it to us and we submissively each took a corner and slipped it under the door to Giovanni. And just like that, all was well in our little world.

The truth is, when we are kids, we don’t understand all the details involved in our little lives. We trust our parents to love us and make decisions that will benefit us, cumulatively, throughout our years. We find ourselves on a boat for two weeks having a grand adventure, but not knowing we are sailing further and further from our world … everyone and everything we know and love. We don’t know all the years of prayer and struggle that went into the decision to let go of that life and follow “a call” to go tell people Jesus loves them. We had no way to process the unseen years they each had, separately, and now together told God they would be obedient to go wherever He took them. We just saw two people who loved us, loved each other and Jesus living a life that seemed to say, these are the things we value…and that was a good example to follow in our eyes.

We didn’t stay five years … not even close. I believe it was, “just shy a term,” so to speak. The chocolate didn’t last, so, it seemed it was time to go home … at least that’s what I concluded, as a 7-year-old child. An important lesson I learned is that, after all is said and done, a willing heart is mostly what God is after. I don’t think he judges us by our years of service in a certain place, but by the fact that we were willing to serve. The impact of their surrender never left me. I witnessed two people being willing to do the hardest thing imaginable … leave everything and everyone, and to go to the ends of the earth for the sake of the call. I was so impacted by that, that many years later, I too would repeat this scenario (but that is another story for another time).

“And he said, “The Son of Man must suffer many things and be rejected by the elders, the chief priests and the teachers of the law, and he must be killed and on the third day be raised to life.” Then he said to them all: “Whoever wants to be my disciple must deny themselves and take up their cross daily and follow me. For whoever wants to save their life will lose it, but whoever loses their life for me will save it.” (Luke 9:22-24)

*from the site:  candywrapperarchive.com I noticed candy bars sold in the 1960’s cost .5cents each.

4 thoughts on “A Boat Load of Chocolate”

There was an error retrieving images from Instagram. An attempt will be remade in a few minutes.